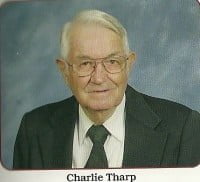 Charlie Abner Tharp, son of the late Charles Abner and Pearl Emina Johnson Tharp, was born September 23, 1923, at Humble, Texas. He entered into eternal rest in his Father’s house at the age of 87 on January 31, 2011, from his home in Lawrenceville, Georgia.

An Army Veteran of WWII, he married Dorothy Marjorie Rimbey on March 11, 1946, at Newton, Kansas. They enjoyed over 46 years of marriage together prior to her death 18 years ago.

He is survived by his sister and brother-in-law, Juanita and V.E. McNeese; three sons and daughters-in-law, Terry and Carmelita Tharp, David and Candy Tharp, and Kenneth and Viola Tharp; three daughters and sons-in-law, Dianne and Rick Hall, Anita and Robert Paarlberg, and Carol and David Caudell; 16 grandchildren; two great grandchildren; and many nieces and nephews.