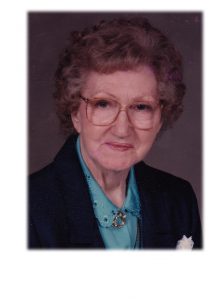 She was born the daughter of the late William (Bill) Griffin and Matilda Jane Duncan Griffin, on November 21, 1917 in Ozark County, Missouri and died October 24, 2015 in West Plains, Missouri.

She was united in marriage to Carl Cobb who preceded her in death.

She was preceded in death by her parents; seven brothers and three sisters; one daughter-in-law, Mary Charlene Cobb, and one grandson, Gregory Dwayne Cobb.

Burial will be in Oak Lawn Cemetery, West Plains, under the direction of Carter Funeral Home, Inc., West Plains.