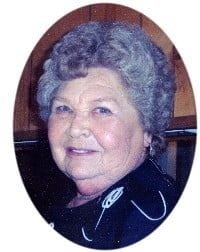 Mary “Wilma” Cantrell was born the daughter of William Clayton York and Laverne Pettie York on December 23, 1935 in Sarah, Mississippi and departed this life February 6, 2012 at St. Bernard’s Medical Center in Jonesboro, Arkansas at the age of 76 years.

She was united in marriage in Kansas City, Missouri to Robert “Mutt” Cantrell, who preceded her in death on April 15, 2003.

She is survived by her first cousin, Jane Abbott of South Haven, Mississippi; one step-son, Robert Cantrell of Harrisonville, Missouri: and a host of nieces, nephews, step-grandchildren, great-nieces, great-nephews, other relatives and friends.

She was preceded in death by her parents, William and Laverne York; her husband, Mutt Cantrell; two brothers, Joe Edward York and William Clayton York, Jr. and one aunt, Lenora Westmoreland.

Wilma was a long-time resident and made her home in Thayer, Missouri. She was a homemaker who enjoyed crafting and sewing and a member of the Jeff Church of Christ.

She will be remembered as kind and caring, a loving friend and neighbor and will truly be missed by all.