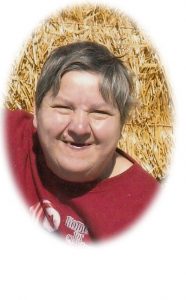 Virginia Ann “Annie” Thompson was born October 1, 1959 in Jackson County, Missouri to Virginia Marie Thompson. She died December 29, 2015 after a brief stay at NHC. She was raised in and around Brandsville, Missouri and attended the State School in West Plains, Missouri.

She is survived by her step-father, Roger Campbell, West Plains, Aunt Tiny Bledsoe, state of Illinois, and many friends
Annie had been a faithful and dedicated employee of Ozark Sheltered Industries in Pomona for over thirty years. She had a strong work ethic and only recently resigned when her health declined.

Annie had moved into Wiley Boarding Home in 1981 and became a resident with Newtons in 1991, as Mike and Sheila acquired the facility. She then moved into the new Lamplight Village in 1997 with Newtons and was a very beloved lady with a multitude of friends who will miss her. She was active in Special Olympics and wore her hard earned medals with pride. She had many friends through work and her participation for many years in Special Olympics.

Attending church was very important to Annie and she was an active and loved member for many years at First Baptist Church. She also was welcomed and loved at Faith Assembly and the First Methodist Church.

Annie lacked the ability to speak but she was quite adept at communicating, and had a keen ability to get her point across. She never met a stranger and gave absolutely the best hugs to the many many people important to her.

Annie was a sweet soul who left this life without ever having made one enemy, but instead was loved by anyone blessed anough to cross her path.

She is preceded in death by her mother, Virginia Campbell; her grandparents, Maudie and George Thompson, and uncles, James and Earl Thompson.

Whenever we hear the name Annie in the future, it will bring to mind a sweet memory of our one and only “Annie”.

Burial will be at Galloway Cemetery, West Plains, Missouri.