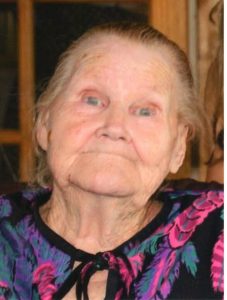 Rena Mae Lowder was born the daughter of William Everett and Alice (Hester) Everett on February 8, 1931, in Mark Tree, Arkansas, and departed this life on December 20, 2016, in Salem, Arkansas, at the age of 85 years.

She was a Christian and of the Pentecostal faith. While she was able, she enjoyed bringing others with her to the church services at the United Pentecostal Church.
She spent most of her life as a homemaker. She would always help people in need and she spent time caring for the elderly.

She was an awesome cook and loved to cook for her family. She was especially known for her fried chicken.

She will truly be missed by her family and many friends.

Funeral Services for Rena Lowder will be held Friday, December 23, 2016 at 2:00 PM at the Carter Funeral Home Chapel in Thayer, Missouri, with Brother Clay Risner officiating.

Burial will be in Thayer Cemetery under the direction of Carter Funeral Home in Thayer.