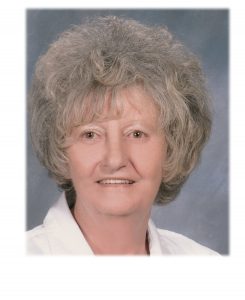 Peggy June Barton, daughter of the late Charley Roberts and Maggie Marie (McGehee) Roberts was born in Bakersfield, Missouri June 16, 1943 and departed this life September 15, 2015 at the age of 72.

She was a cheerleader, telephone operator, seamstress, secretary, and business owner.

She was united in marriage March 20, 1961 in West Plains, Missouri to Burvel Dewayne Barton who preceded her in death August 11, 2005.

She was preceded in death by her parents; one sister, Louise Roberts, and two brothers, George (Sonny) Roberts and Dallas Roberts.

She was a member of First Baptist Church in West Plains, Missouri.

The family would like to thank the staff at OMC for their care and kindness, and very special niece and nephew, Jeanie (Atkinson) Petrus and Lawrence Atkinson for the help and love shown for the last several years.

In lieu of flowers, contributions may be made to the Baptist Hill Cemetery, Bakersfield, Missouri and can be left at Carter Funeral Home, Inc., West Plains.

A visitation time will be held Friday, September 18, 2015 from 6 to 8 p.m. at Carter Funeral Home Chapel, West Plains.

A memorial service will be held on Saturday, September 19, 2015 at 1:00 p.m. at Baptist Hill Cemetery, Bakersfield, Missouri, with Reverend David Ball officiating.