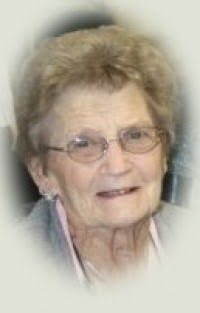 Neva Helen James was born the daughter of Elijah Honeycutt and Pearl (Rose) Honeycutt in Randolph County, Arkansas in the Ring Community on January 26, 1925, and departed this life October 18, 2012 at the home of her daughter in Bono, Arkansas, at the age of 87 years.

She was united in marriage on October 30, 1943 at the home of L.E. Mahaffey in the Ring Community to Lehman Ray James, who preceded her in death November 9, 1984.

Neva was a dedicated homemaker and an excellent cook. She enjoyed quilting and was a great seamstress. Neva was Lehman’s right-hand on their family farm and continued caring for the farm and their cattle herd seven years after his death.

She was a faithful Christian lady and member of the Church of Christ at Jeff. She was a beloved wife, mother, grandmother and a loyal friend. She will truly be missed by all who knew and loved her and the community in which she lived.