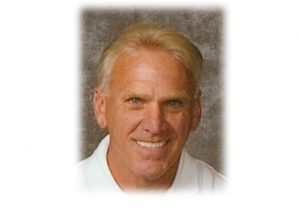 He was born September 13, 1953 in Blue Island, Illinois, the son of Harold Mickey, Sr. and Faith “Paulsen” Mickey.

He was united in marriage to Marcella Goss on September 1, 1984 in West Plains, Missouri.

Moving to West Plains after graduation he was employed at Ramey Supermarket. Later he was employed with Sunshine Biscuits, Russell Stover and in 2000 opened the Domino’s Pizza franchise. During this time he was blessed with the friendship of Marcus Lipford.
Mickey took pride in serving his community. He had been a member of the Fairview School Board, West Plains Country Club Board, Elks Lodge, Chamber of Commerce, Rotary, St. Paul Lutheran Church council, and was currently serving on the board at the Howell County Ambulance Barn.

He was also an avid golfer treasuring time spent with his golf buddies; enjoyed deer hunting, and liked seeing his grandchildren joining in this tradition.

He was preceded in death by his father, and brother Harold Mickey, Jr.

Memorial contributions may be made to St. Paul Lutheran Church or St. Jude Children’s Hospital and can be left at Carter Funeral Home.