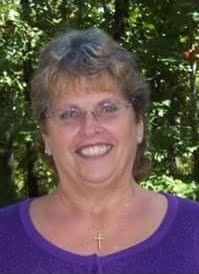 She was born the daughter of the late Mary Juanita Larson Michaels, on August 18, 1949 in St. Louis, Missouri and died September 2, 2015 in Springfield, Missouri.

She was united in marriage April 4, 1983 in West Plains, Missouri to William Goss, who preceded her in death.

She was preceded in death by her husband; her mother, and one infant sister, Joanne.

She was a teacher’s aide for the West Plains Public School System. She loved the outdoors. She was well known for her beautiful smile. She will be greatly missed by all who knew and loved her.

Visitation will be held at Carter Funeral Home Chapel on Saturday, September 5, 2015 from 6 to 9 p.m.

In lieu of flowers, balloons will be released at the cemetery. So family has requested if you would like to send a balloon, or balloons that would be greatly appreciated.

Burial will be in Pleasant Hill Cemetery, Howell County, Missouri, under the direction of Carter Funeral Home, Inc., West Plains. Family has requested that if you want to ride in procession from the funeral home to the cemetery, please be at the funeral home by 1:00 p.m.