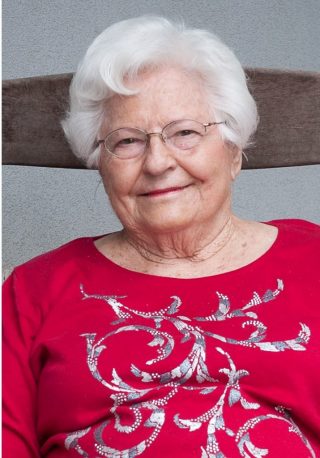 Helen Staires Dethrow died in Dallas, Texas on April 23, 2020. She was 94 years of age. Edith Helen Staires was born, a surprise, in Couch, Missouri on December 25, 1925 six minutes following her twin brother, Edward Harlin. Their parents were Ode Alvin Staires, a carpenter and farmer, and Eva Clay Staires who ran the farm and raised their six children.

Helen was educated in a one-room schoolhouse where she and Harlin shared a two-person desk. She loved to say that Harlin sometimes cheated off her work. At age 16, Helen became the sole teacher in that same one-room school. She discovered a love for diagramming sentences and used her old grammar text decades later to lovingly whip grammar lessons into her sons and grandsons. Though money was tight, she took college classes at Southwest Baptist University.

Helen grew up in Couch, Missouri alongside the love of her life, Arnold David Dethrow. Arnold returned to southeast Missouri from the Army Air Corps near the end of WWII and proposed to Helen. They married on July 10, 1946 in Alton. The new couple moved to Tulsa, where Arnold attended college and law school at the University of Tulsa. While Arnold was at school, Helen worked to become head of revenue accounting at Tidewater Oil Company. She was, at that time, the highest ranked woman in the organization and proudly laid claim to its first electric typewriter. She loved stat typing (numbers) and out-earning her husband in those early years.

Helen and Arnold had two sons while in Tulsa, Jeff and Brian, and Helen “retired” to raise them. Soon Arnold’s career in the oil industry began to take off, and the family moved often over the next 24 years: to Denver, Oklahoma City, Houston, Midland and back to Houston, culminating in a corporate transfer to Sugar Land, Texas in 1984. While raising the boys, Helen was their tutor and paper typist, cake maker for school cakewalks, PTA President, cub scout leader, band mom and track team mom. When the boys were older, she re-entered the workforce as a bookkeeper for Ballengers, a furniture store in Oklahoma City, “to get the discount” for living room furniture. How she loved her gold velvet couch! She later worked as a mortgage processor.

In retirement, Helen and Arnold tended to their aging parents and growing grandchildren. They sang in the Silver Tones Senior Choir at Sugar Creek Baptist Church in Sugar Land, worked out regularly together and they both loved to water ski. Highlights of their travels included trips to Australia and Alaska. Arnold passed away in 1996, and Helen remained active with the choir. She enjoyed volunteering for the Chaplain at Houston Methodist Sugar Land Hospital and was a devoted poll worker in her neighborhood. All who knew her loved her baking skills which she so freely shared with others. Helen’s greatest joy and most beloved role in life was being Grandma to her grandchildren and later, to the great grandkids. Helen lived at The Terrace in Sugar Land for eight years and made great friendships there. Due to declining health, she moved to Dallas in 2015.

Helen was preceded in death by her parents, Arnold, Harlin and her other siblings: Nellie Archer, Palos Shields, Jack and Paul (Buddy) Staires. She is survived by her sons Jeff (and his wife Martha) and Brian (and his wife Anne), and her grandchildren: Betsy George (husband Brian), Molly Cash (husband Nathan), Sam Dethrow and Peter Dethrow. Helen was also blessed with great-grandchildren, Kinsley Elizabeth George, Weston Wallace George, Lucy Helen Cash and Walker Norris Cash as well as many nieces and nephews. She loved us dearly, and we will miss her very much.

Services will be held at a later date, and a private burial will be back home in the Ozarks at Cave Spring Cemetery in Alton, Missouri. In lieu of flowers, please consider a donation to South Main Baptist Church, Music Department, 4100 Main St., Houston, TX 77002, or Southwestern Medical Foundation, 3889 Maple Ave., Ste 100, Dallas, TX 75219.