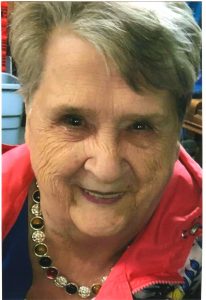 Doris Maggie Jennings was born the daughter of Walter Peterson and Hattie LaTour Peterson on September 23, 1933, in Rockford, Illinois, and departed this life on August 2, 2018, in West Plains, Missouri, at the age of 84 years.

She was preceded in death by her parents, Walter and Hattie Peterson; her husband, Darrel Jennings; one son, Ricky Jennings; and four sisters.

Doris was a Christian and a member of the Myrtle Freewill Baptist Church in  Myrtle, Missouri and faithfully attended as long as her health permitted.

She and her husband ran a convenience grocery store in Myrtle for many years.

Doris loved to sing and play the piano.  Doris spent her time solving jigsaw puzzles and played dominos at the senior center.  She also was known for her crocheting.

Doris was loved by her family and will be missed by all who knew her.

Memorial services for Doris Maggie Jennings will be held on Monday, August 6, 2018, at 2:00 PM at the Myrtle Freewill Baptist Church with Brother Ralph Douglas officiating.