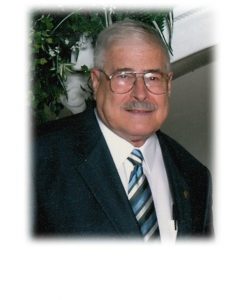 Charles graduated from West Plains High School in 1949 with honors. Upon graduation, he attended Rolla School of Mine where he graduated from in 1953. He began working for the United States Geological Survey in Rolla, Missouri and then transferred to Colorado, working primarily in the Denver area. He retired from the USGS in the mid 1980’s.

He was united in marriage with Lucille Phillips in 1951. From this marriage came three children; Elizabeth Ann Callaway Garcia, Charles Phillip Callaway, and John Boone Callaway.

In 1970, he married Marjorie McConnell Callaway, who proceeded him in death in 1989.

Charles Callaway and May Dean Parker Callaway were joined in matrimony on October 9, 1991 in Colorado Springs, Colorado.

From a young age, he was a member of the United Methodist Church. He currently attended the Center of God Church.