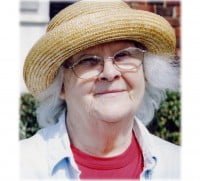 Valtia Agnes Van Winkle was born the daughter of Henry Lloyd Waggoner and Myrtle Belle Baker-Waggoner on March 30, 1930 in Oregon County, Missouri and departed this life on June 11, 2011 in Springfield, Missouri at the age of 81 years.

She was united in marriage on January 27, 1950 in Salem, Arkansas to George Alex Van Winkle, who preceded her in death on September 20, 1976.

Agnes was a dedicated homemaker. She spent many hours sewing, crocheting and making quilts for personal use as well as heirlooms for her family.

She was well known as the lady with a green thumb. Agnes loved being outdoors working in her vegetable garden or enjoying the beauty of her flower garden.

She was of the Baptist faith and will be remembered as a loving wife, mother, grandmother and sister. She will truly be missed by all who knew and loved her

Funeral services for Agnes Van Winkle, age 81, of Springfield, Missouri, formerly of Alton, will be Friday, June 17, 2011 at 11:00 AM in the Many Springs Baptist Church near Alton. The family will receive friends Thursday, June 16th from 6:00 to 8:00 PM at the Carter Funeral Home in Thayer. Burial will be in the Many Springs Cemetery with services under the direction of Carter Funeral Home, Inc. in Thayer.