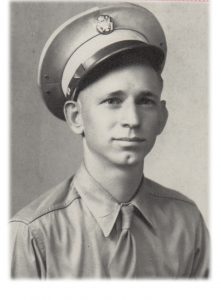 Burial will be at Oak Lawn Cemetery.

He attended school at the Garﬁeld School and graduated with the
Class of 1942 at Couch High School, both in Oregon County.
After graduating from high school, he trained as a machinist and worked on his family’s farm until he was inducted into the United States Army in 1943 proudly serving during World War II as a machinist. He liked to tell that during his military service he traveled around the world leaving New York City for France then Germany. He sailed through the Panama Canal on his way to the Philippines, then to Japan, and returning to the states at Seattle, Washington.

Oren Sanders married Ada Jessilee Stubbleﬁeld on September 21, 1946. They were to have celebrated 70 years of marriage this year. Their two children are Edward E. Sanders and Donna Sanders Hayes.

Mr. Sanders and his brother-in-law, Joe Stubbleﬁeld, owned and operated Sanders and Stubbleﬁeld Implement Company in Alton and West Plains from 1957’until he sold his interest in 1972. He was a proud JOHN DEERE man; his favorite tractor was his 1941 John Deere LA which he drove in many local parades. He was a charter member of the Early Days Gas Engine/Older Iron Club and was inducted into that organization’s National Hall of Fame. Oren
and Jessie were active in the Veterans of Foreign Wars Post 1828. He was past president and also served on the Veterans Honor Guard presiding over dozens of military funerals. He had attended First Baptist Church of West Plains since 1964.

In lieu of ﬂowers the family requests memorials to the First Baptist Church Food Pantry of West Plains or the New Salem Cemetery at Couch, Missouri. Memorials may be left at or mailed to Carter Funeral Home, West Plains.